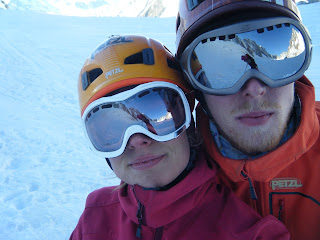 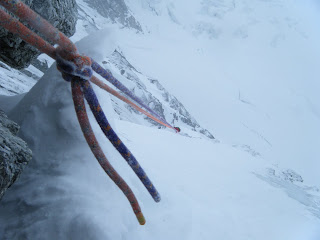 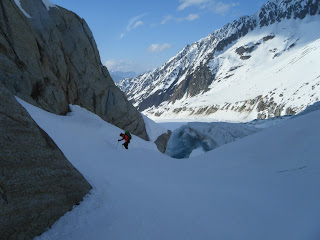 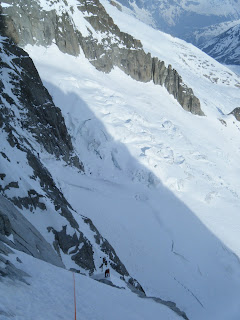 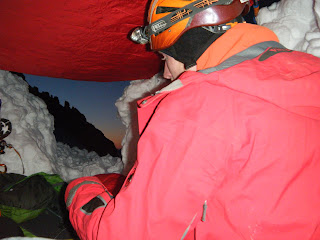 There I am again, back in ‘the low lands’. After a big weekend in the real mountains (Chamonix).
I was fed up by being here, no climbing, no ice, no mountains. Just work. I needed to go out and I was reaaaally missing Dennis. He’s doing is traineeship at Petzl right now and is living in France for half a year. (Really cool but sometimes France feels like a ‘million miles away’)
Then I was thinking… I’m working as freelancer so I can climb more and that’s why I’m working. So…I should go out and climb as much as possible.
The possibility was there, right there. It just included some money and time. (Time enough and I didn’t bother the money).
So suddenly on Wednesday I was climbing in the Netherlands and on Thursday I was on my way to France.
I met Dennis in Crolles. He already took off from work and I met him in style: Dennis driving his home/van.
We both felt weird, happy and yet after two seconds it already felt ‘normal’ again to be together. Though cute as it sounds, I had those tiny little butterflies in my stomach again :)
We did some ‘Alpine-climbing-shopping’ (candy bars and other food that contains loads of fat, sugar and other types of instant bulk-energy) and went for the drive to Chamonix.
We didn’t even make it half-way. We enjoyed the sun (is was over 20 degrees in Grenoble!) too much. Dennis even started to show freckles already ;)
We drove on the next day, went for a pit-stop in the Decathlon store (where I heard Tania passed her Winter/ice guiding exams! I hope the cake was good ;)
We took the cablecar up to the high point at Argentiere. To skie down again (sort of). With backpack on this steep snow it was quite hard for me. I sort of managed to get down the slope happy that only climbing lay ahead of us for the next day.
We dug a snow-hole just under the route. Just deep enough to avoid hitting the crevasses.
It was quite cold but allright when I finally fell asleep.
I slept quite light but we both didn’t hear our alarms that morning! One hour late we started on the route: The Ginat/Jackson.
The first bit was just snow digging. Easy enough to do without a rope. We dug ourselves a way up and were quite okay I found. On a certain point I guessed it would be better to use a rope so we wouldn’t drop off the whole cliff if something would go wrong.
We both didn’t question the use of a single string of the rope and just climbed on.
We went slower and slower fighting the altitude. The weather started okay. Cloudy but the later it became the more fog came in and eventually it was snowing.
The climbing was surprisingly easy and just seemed to go on for ages. In the start there was a small mixed section and then the big icefield.
That icefield seemed to go on for ages! It felt like a never ending story.
I really had to motivate myself to move: okay, just 5 steps more and then you place a screw… and then after those five steps I said to myself ‘just 5 steps more’. And finally it were 15 steps before I placed the next screw. And then 100 steps again. Or 105, or 110 and then with 115 I was proud enough to place another screw.
I was slow, but Dennis probably felt even worse. On the start of the Jackson variant of the Ginat Dennis told me he wanted to go down.
Okay.
No choice. Just go down now.
Not that I felt good at the height. I was tired after just moving to axes :) So going down was an okay option.
We abseiled over the route and were just able to find the belays and abalokovs. Even our own newly made ones disappeared every time again in the huge spindrift (including ice and rocks) that came down every minute or three.
Sometimes I just had to put my axes in the ice again to keep myself stable because of all the snow coming down over the route.
Dennis got his on his cheek by a big piece of ice. Resulting in a beautiful bloody ‘egg’ on his face. We got used to the ice hitting our arms and legs and the look of the snowman abseiling next to me.
Beneath us there were two Swiss climbers going up still. When we were down again (without getting our rope stuck or failing belays or dropping gear/headlamps) we saw that they went back too. The soloist we met under the cliff didn’t even start his climb…
We packed our bags and skied down the Argentiere glacier and the (horrible) piste on the other side.
For me it was quite hard to get down. I really had to go slow to be able to keep control and not disappear in a crevasse or drop down the hill. I just need to learn how to ski… But for my fifth time on ski’s and with the backpack I found I managed quite allright.
Down in Argentiere we were both just tired. I was wondering why we bailed. Really it was just the height :) Altitude is a bitch… How much that stuff can affect your climbing. Note-to-self: try to acclimatise before trying things on 3000m+
In the end it was all love for the both of us: nice to hold the axes again and get freezing cold hands, two sleepingbags in a cold snow-hole, both closed up so we could hardly hear each other, running belay-climbing so we hardly saw each other and we got so tired that we bailed. How romantic! Let’s go again this week!
Thanks Dennis for the climbing :)
Pictures: Dennis & me on the climb, ascent and descent.
Categories: Dennis, iceclimbing
Leave a Reply Cancel reply