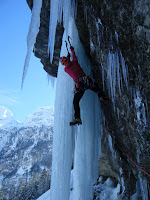 Cold as in having a cold.
After almost 2 months of climbing we finally got one. Thanks to Romania and the travelling we guess.
(With the snow in Romania we got a huge delay: first we waited in the plane in Bucharest for 3 hours, then we stood in a que for 4 hours, then we got crappy dinner in a restaurant where everyone was smoking, then we woke up at 4:30 in the morning to catch our delayed flight, that was delayed for one hour and when we got to Munich we figured our flight to Geneva was canceled and then we waited again for quite some hours to finally arrive in Geneva on Tuesday evening instead of Monday midday…)
We had a restday yesterday but last night we both had the same thing. We really couldn’t sleep and had a blocked nose and a heavy head all night. Addicted as we are we still wanted to climb what we planned Almenalp-something (sorry, I’m so bad in remembering route names). A mixed line that you can see from the Scout Centre in the Kandersteg Valley.
We were hopeless. First it was the walk up which normally takes 30 mins. We were struggling in the snow covered in it up to out waist and sometimes we sank in to our chest. When we were finally there took me ages to climb the first bit (M9). Figuring all the moves, some sppoky holds and the ice in the start. Although it was partly bolted it was still a bit scary to climb. We left the draws and some screws and decided we’ll come back in two days when we hopefully feel better…
(sorry forgot to put the pictures from Dennis’ camera on my laptop)
Update: had a semi-restday today and went climbing with Rick in Kiental. Fun!
Category: iceclimbing
Leave a Reply Cancel reply