It’s finally Sunny here in the Netherlands, making it feel like Summer.

All the stress of getting everything done in time also belongs to the Summer feeling I guess.
Tax forms, invoices, MOT for my car(s), some work, a lecture for Outdoor, preparations for the Dutch Drytool Event, Expeditie Geluk, preparations with the Van Hoek family for the family climbing adventure and much more…
Oh yes, and Climbuz has to be ready for the Summer trip too.

In between I try to climb too.
Although, never enough… I wish I could climb twice a day, every day but three times a week seems the average for now. Making me feel slow and fat.

Apparently I’m not too fat yet, as I ended in 4th place on two national leadclimbing competitions. With that I’m good enough to be in the finals of the national lead competition.
If I had more time to climb…
Apparently I’m not too slow either as I reached the podium of the open national (“student”) speedclimbing competition too. Second place.
And so, so close to gain the first place! I made a classic Marianne-mistake: I should have jumped to the top, instead I reached…static doesn’t work when you climb on full speed :(
Roelien was smart enough to jump and won.

About the fat issue, I went to a nutritionist last week, to talk about food, energy, efficiency and more.
There’s so much nonsense to be found about nutrition, weight and health related to sports, that I found it a better idea to ask a pro about it all. As marathon runner and a non-believer in extra proteins he had some interesting research and facts to show me. He gave me some fairly simple but interesting tools to use. Let’s see how that will work in the rest of this year.

My parents are not worried about any fat issue for the next two months. They’ll be cycling again. This time to Santiago following the French coast line.
My mum left all behind by retiring, my had is happy to join the journey (but still has a couple years of working left…)

I also went to Schoorl.
Collecting rubbish for half a day and MTB for the rest of the day.
As ambassador of Respect the Mountains it was good to see how much effect a little bit of work has. Together with more then 60 volunteers and some ambassadors over 700kg of rubbish had been collected within just 2 hours time!
It’s impressive to see how much of it is plastic. Even plastic toys were part of what we found. 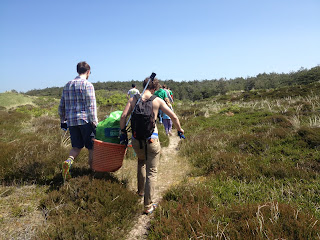 Dennis has been busy too. First with school. He has a lot to do before he can go to his final traineeship in Germany after this Summer.
At the same time he tries to fix Climbuz.
A new engine, a fully working gearbox again and now everything is electric it’s a lot harder to understand what might be wrong. (…or do I just have to reset the accelerator with the computer…?)
Since today the van works again! He took Climbuz out for a ride and hopefully we’ll get it fixed before we reach Friedrichshafen on Wednesday.

My two cars have MOT again and I decided I should sell my lovely Golf 1.