Last week I drove Dennis back to his French hometown Crolles.
And I stayed for another week.
Not just in Crolles :)

Gaetan, a French climber (drytooler involved in the DTS) was willing to belay me for a couple days.
The weather was quite bad on Tuesday. So we decided to try another area. A secret area just a bit further South. Let’s call the place G-Spot.
Florent, ‘the real local’ joined us for a really beautiful day of climbing.
I wasn’t sure about what I could climb, so started with a 6b warm-up. But soon I was getting on the same routes as Gaetan and Florent and gaining confidence!
I climbed some really beautiful lines on perfect rough limestone. No chalkmarks, no slippery footholds, just pure climbing with an awesome view.
That evening we bivouacked close to the cliff and in the morning we drove to Gap.

I forgot to bring shorts (stupid…) so I had an excuse to buy a new pair in the local climbing shop before we walked up to my favourite climbing area.
There’s so much to climb there that I hardly knew where to start.
Geatan decided: Grande Face. Because there are a lot of new routes.
It was a good choice. So many lines that just asked to be climbed!
Gaetan is climbing quite a bit harder then me (and as he has mountains to do trailrunning and I only have tarmac his stamina was a bit better as well…)
I suddenly had a chance to climb and try whatever I wanted. There was always someone to climb it again or finish the line if I couldn’t.
This somehow gave me so much freedom. I lost all pressure to ‘achieve’ and climbed harder then ever!
Gaetan also taught me something I forgot: chill and enjoy, the French style.
I’d often been climbing with people that had the idea to climb as much as possible, had daily route quota’s, needed to climb at least one 8a per week, force warm-ups in at least 7a’s and wake up early to start as early as possible…

On our second day in Céuse we climbed with Tania, an extremely enthusiastic girl from Cyprus. She had so much energy!
She tries to finish her PhD in Computer Science in a Gîte in Céuse, is learning French, climbs with the locals and if she’s finished her PhD she wants to become a French climbing teacher.
I had some chocolate and shared it with Tania. Gaetan doesn’t like bitter 70% chocolate :) We really didn’t understand that. Tania came up with an explanation on why we like chocolate: steep climbing is like chocolate. And she’s right.

With the pressure that had disappeared and the ‘French climbing style’ (chill, relax and do whatever/whenever you want to) I suddenly saw myself doing a beautiful new 6a as warm-up, just because it looked so beautiful, then climb the route next to it, just because it looked good and then try another route that just looked challenging. Meanwhile (typical French) complain that it’s too cold, too warm, too rough, too smooth but never worry about it and lay in the sun for an hour, just chat and wait till I felt ‘ready’ again to do another try in the route. Eat a bit of bread, sausage and some fruit, wait for another 30 minutes or more and try again. Or not. That just didn’t matter because you should just climb to enjoy and like the route and the nature around it. Not because it’s 7a, 7b, or whatever the grade might be.
And of course, if the climb is a challenge it’s more fun, but if that challenge is a 6a then thats o.k. and if it’s a 8a thats o.k. as well. Sometimes the challenge differs per day, like on our last day (Friday) in Céuse: we were tired. Too tired to actually climb in the sun. The sun was too warm that day and I could hardly climb a 7a. But it was o.k. 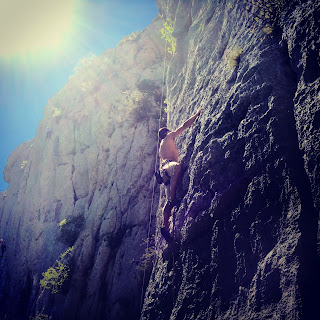 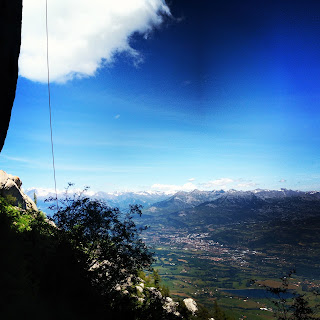 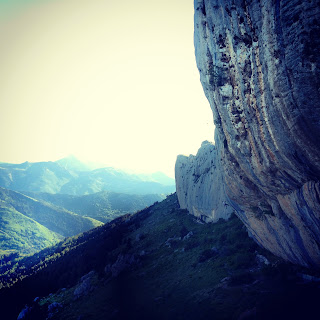 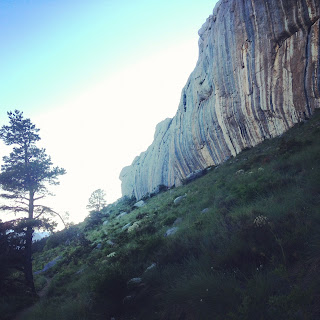 Friday. Time to head back to Crolles.
Dennis and I just had to spent some time together.
So Gaetan left for a weekend full of trailrunning and Dennis and I drove up to St. Pancrasse close to Crolles.
Dennis had a headache and I was tired of all the climbing.
So we had a semi-restday. We climbed (French style) in the late-midday/evening.

Petzl is located in Crolles, the Petzl history lies in the caves of the mountain facing the village: Dent de Crolles. So as Dennis is doing his traineeship in Crolles it was logical to climb the Dent de Crolles.
First when I saw the limestone face I told Dennis “we must climb that thing”.
And so we did.
A bit on the right side of the face as the direct lines would take you a couple days full of aid climbing (and we only had one day).

The ‘JB Directe’ (TD) was our alternative. A trad route.
We started with a walk from the Col du Coq traversing the cliff to the start of our route.
The route is basically a big chimney. And I realised that chimney climbing is ‘not my thing’.
Maybe it was because of my shoes (didn’t want to wear my climbing shoes in the warm weather so wore my 5.10 Guide approach-shoes) or maybe it was because I was a bit ‘flammable’ because I had my period (or maybe it was both).
But well…I managed…and Dennis managed me. Just a couple pitons and a big chimney guided us to the top. 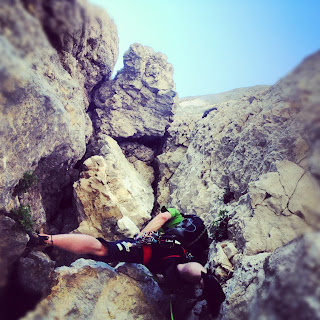 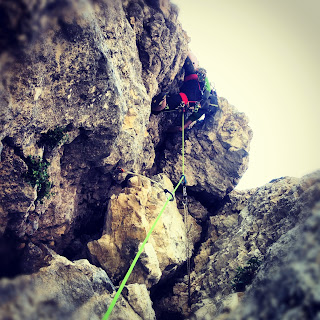 We climbed it easily within ‘guide time’ and walked to the top of the Dent.
The walk down was even more amazing. The green grass, the flowers, the cliffs, the view, the sun and the caves that made Petzl famous.
Together we happily walked down again.

Monday I drove back ‘home’ again. All the way to Bergschenhoek.
On the way I saw a truck with a slogan: “the craziest are the happiest”.
Maybe I’m crazy but I’m sure I felt pure happiness this week. 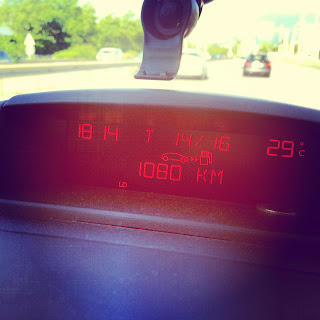 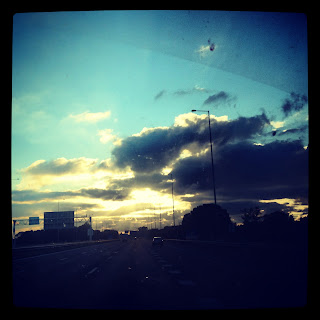 …and now writing this I figured I could have been in Céuse today. Because of some communication issue I don’t have to work today. So I drove all the way back to the Netherlands for…nothing :(